This month’s art loop featured various forms of art including rose-colored glasses, paintings, photography, and ideal depictions of peace in the world.

The Delaware College of Art and Design hosted a letterpress design printing exhibition. Casey Smith, Program Chair of Liberal Arts at DCAD, says he wanted their students to learn about what artists Ray Nichols and Jill Cypher, owners of Lead Graffiti create in their letterpress printing shop. 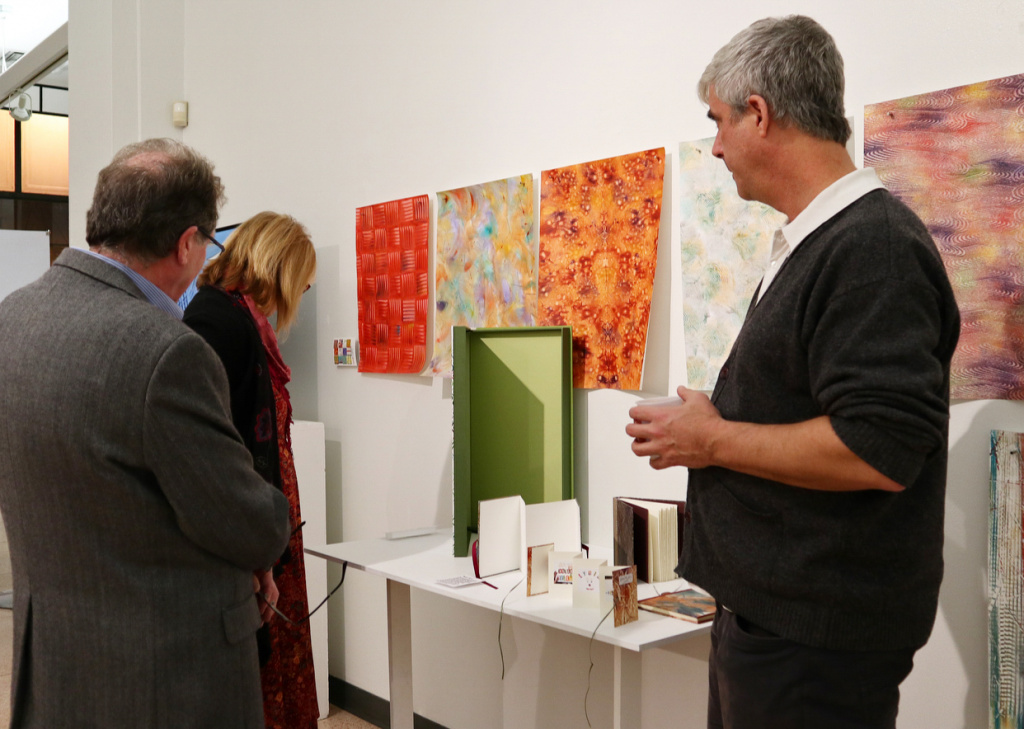 “[We wanted] our graphic design students because of the typography, but also the fine artists, printmakers, and everybody here to see a creative enterprise. To see artists who have a business and are doing their own thing. It’s very inspiring,” says Smith.

Lindsay Schmittle, an alumna from the University of Delaware and owner of Gingerly Press, visited the exhibition and talked to the students and visitors about building a creative business and her journey as a letterpress artist.

“I’m very much a proponent of developing your own artist voice that is unique to you. As a business owner, it is your most valuable asset other than your time,” says Schmittle.

She creates her geometric paper designs with handset type, which is the old-school way of creating this particular art. Much of her work is inspired by mindfulness and nature, such as moss she sees when she goes hiking. She explained the process of her letterpress printing.

“Once your first layer is down, you are committed to that first layer on however many sheets of paper you just printed on. You have to find a way to work with that layer that you already put down,” says Schmittle. 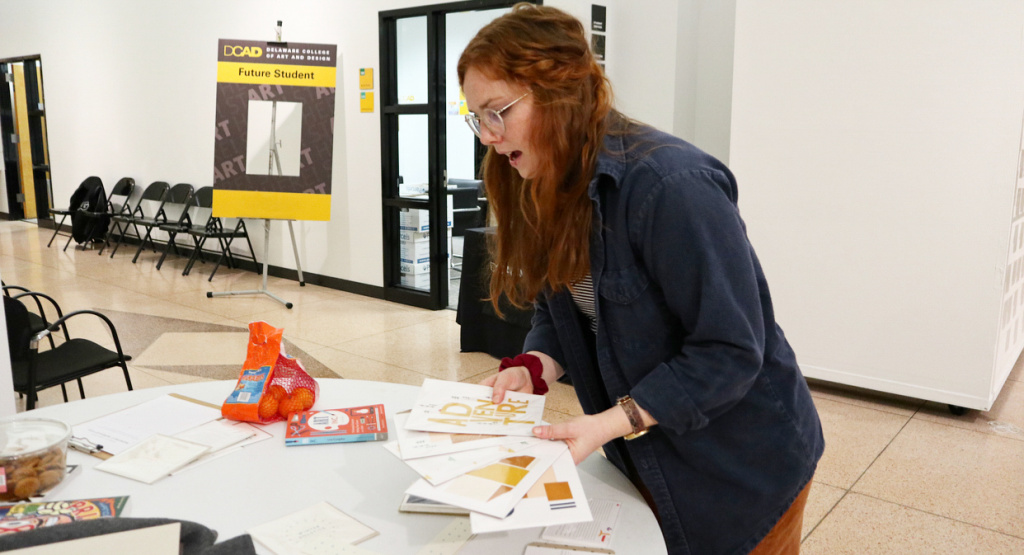 Visiting artist and University of Delaware alumna Lindsay Schmittle shares her letterpress prints during the Art Loop Friday, Jan. 10, 2020 at Delaware College of Art and Design in Wilmington, DE. Photo by Monique Harmon

Schmittle says she enjoys going in the press room and stamping the ink type in what she calls “press sketching”, which is a technique she learned from Nichols and Cypher. This allows her to be less committed to the layer as she is able to plan it out which is less time consuming than trying designs on a computer.

Schmittle met them while she attended the University of Delaware. She wanted more hands-on experience from professionals. Their business is down the street from the University. They host workshops and Nichols has given talks at the University.

One of the recurring themes in some of the couple’s works was that the words printed on the artwork oftentimes represented a rider who was a cyclist in what is called “The Breakaway.” Nichols says at the Tour de France, there are 200 riders who are put in 22 teams. There are riders that jump out in front of the group coming up behind them so that the group behind them doesn’t catch them. 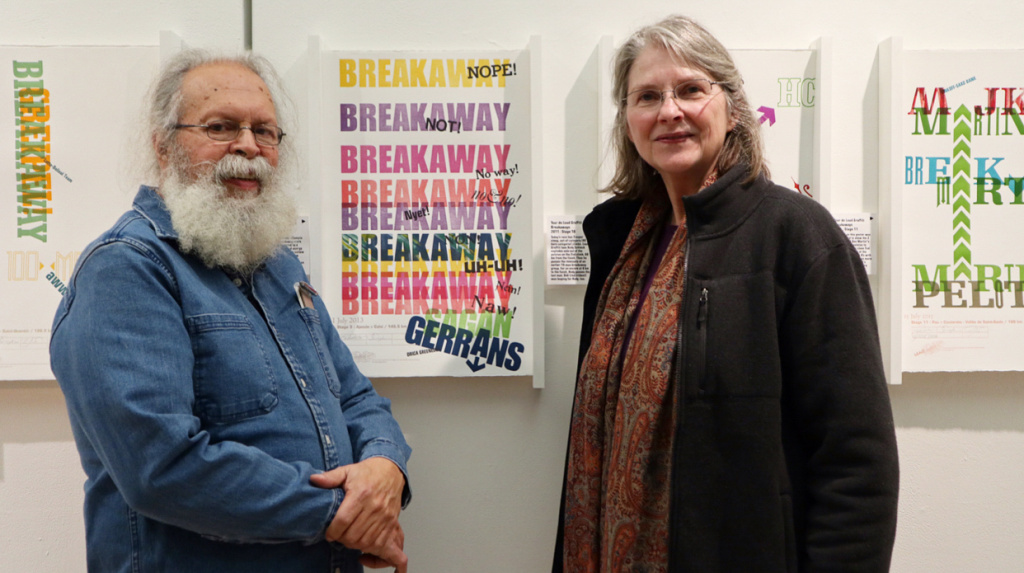 “They almost always get caught. Nine of them broke away. The big group can ride faster than the small group. They run right behind each other. It’s easier to do this with a mass of people,” says Nichols.

Nichols says he listens to the story of an event and thinks about how he will depict that in letterpress type. He can put the type close together or deal with each figure separately.

Art from Wilmington’s youth was hung on the walls of The Grand Opera House by 100 volunteers for Pacem in Terris. The works of art displayed messages of what peace means to them. This is a way for them to communicate with the older generation about creating more peace in the city.

Carolyn Bitzer, a representative of Pacem in Terris says when the organization asked Delaware’s youth in grades K-12, ‘What does Peace mean to you?’, 42 groups responded.

“All of their work hung in the Delaware Contemporary during Peace Week Delaware. It was 650 pieces. We had a jury come in and they selected what they saw as the 100 strongest messages of peace and they’re framed. 25 are here, 25 are at the [Wilmington] Library, 25 are at A.I Children’s Hospital, and 25 are at Bear Library. Every month, it rotates. At the end of the year, First Lady Carney gives them awards for being involved and engaged. They get their artwork back,” says Bitzer.

Artwork depicting peace hangs in an exhibit during the Art Loop Friday, Jan. 10, 2020, at the Wilmington Library in Wilmington, DE. Photo by Monique Harmon

The judges are comprised of Tina Betz, Cultural Arts Director of the City of Wilmington, Leslie Shaffer, executive director of The Delaware Contemporary, and peace and justice leaders in the community.

The Grand featured a work of art titled, “Diana” from one of the students of the Serviam Girls Academy, a middle school for girls from under-resourced communities.

Peggy Prevoznik Heins, President of the Serviam Girls Academy spoke about student Diana, who is really strong in math and is very athletic. She said that she wasn’t sure that many people knew that she had an artistic side.

“Any kid being recognized for something they do is huge! There’s some affirmation about that. This exhibit lets girls know that they matter and their voice needs to be heard. And this is a way for them to bring their voice about a world that’s not always pretty,” says Heins. “And saying we want peace and we’re about peace. I think that’s powerful.”

The deadline for the next year’s art for the Visionary Peace Youth Exhibition will be July 20, 2020, at Pacem in Terris, located at 401 N. West Street in Wilmington, DE.

Please note the Art Loop is held every first Friday of the month. For more information, visit artloopwilmington.org.